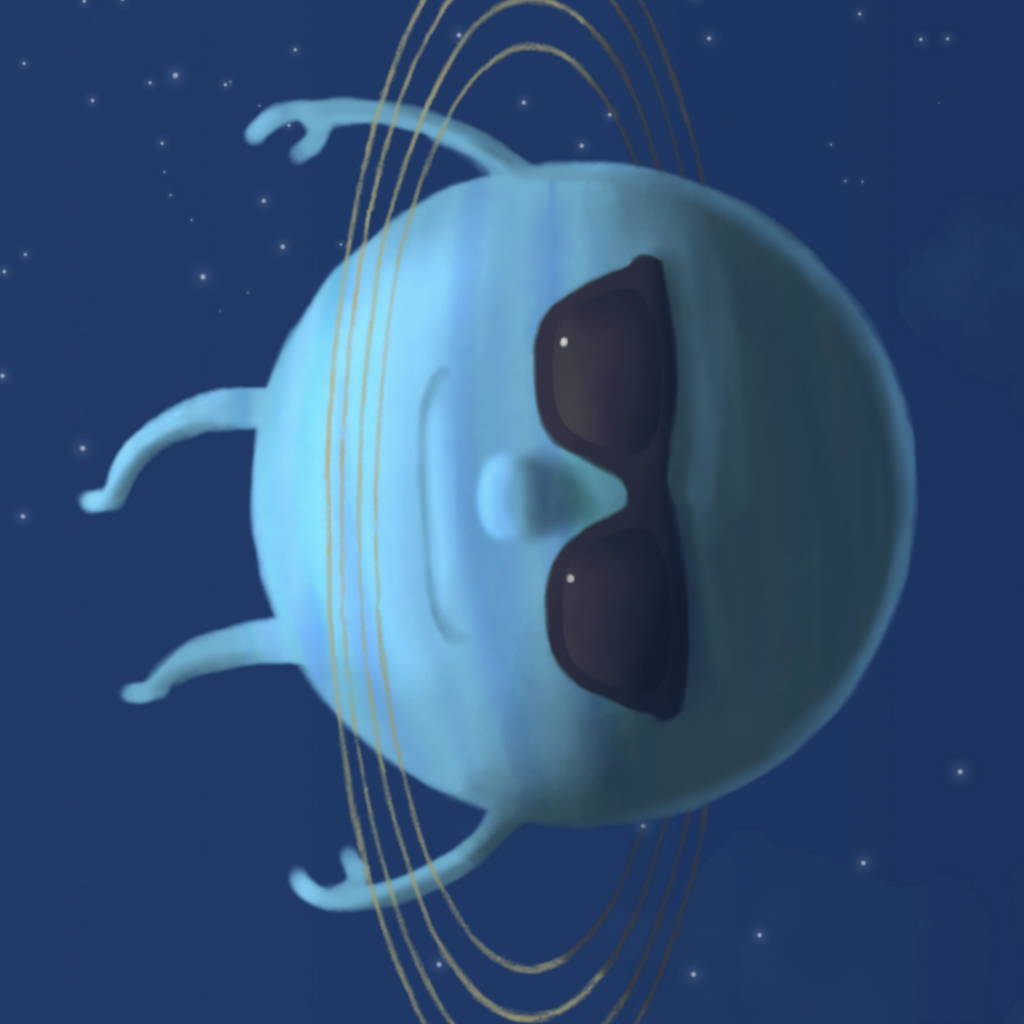 Why is it called Uranus?
All of the other Planets (besides Earth) are named after Roman Gods. Uranus is different, and is named after the Greek God of the Sky. In Greek mythology, Uranus was also considered to be the ‘father’ of Saturn, who in turn was the father of ‘Jupiter’, so it’s a family affair up there.
Why is Uranus super-cool?
Uranus and Neptune are both known as ‘Ice Giants’. At around -175C (-350F), Neptune is on average just a little colder than Uranus at -163C (325F). But the coldest temperature ever recorded in our solar system was on Uranus, at -188C (-371F). So Uranus is super-cool.
Why does Uranus spin backwards?
We’re not sure why, but Uranus spins in the opposite direction to the Earth and almost all of the other planets.
Why is Uranus tipped over on its side?
Of all the planets, only Uranus travels around the Sun lying on its back – you can’t be much more laid back than that. Scientists think maybe Uranus bumped into a planet around the size of the Earth a long time ago, knocking Uranus over onto its side. And it just stayed that way, probably as it’s quite comfortable. Uranus certainly does things its own way.
Does Uranus really also have rings?
Yes, Uranus is surrounded by a set of 13 known rings. But these are much less obvious than the rings of Saturn, and they were only discovered by us here on Earth in 1977.
Why is Uranus blue?
Uranus is a funny place. Like Neptune, fluids and liquids such as water, methane and ammonia all swirl around a small rocky core. And all of this is then wrapped around in clouds of hydrogen and helium (just like Jupiter and Saturn), along with smaller amounts of other gases like methane and hydrogen sulphide. So it probably smells a lot like rotten eggs. But it is the methane that gives Uranus its beautiful pale bluey-green colour.
How do you say Uranus?
There are at least two ways, although one is funnier than the other. Most scientists say it like ‘YOU-re-nus’, which is the non-funny way.
Is Uranus really 8.5 years away from the Earth?
Only one spacecraft called ‘Voyager 2’ has ever visited Uranus, and this was just a quick flyby as it continued on its way out of our solar system. For just 6 hours in 1986, Voyager 2 collected lots of new data about the planet, its 13 rings and its 27 moons. Launched in 1977, it took Voyager 2 around 8.5 years to swing by Uranus.
For more information -  see https://spaceplace.nasa.gov/all-about-uranus/en/ for lots more information for kids about Uranus.
Buy Book
ShareTweetPin itE-mail