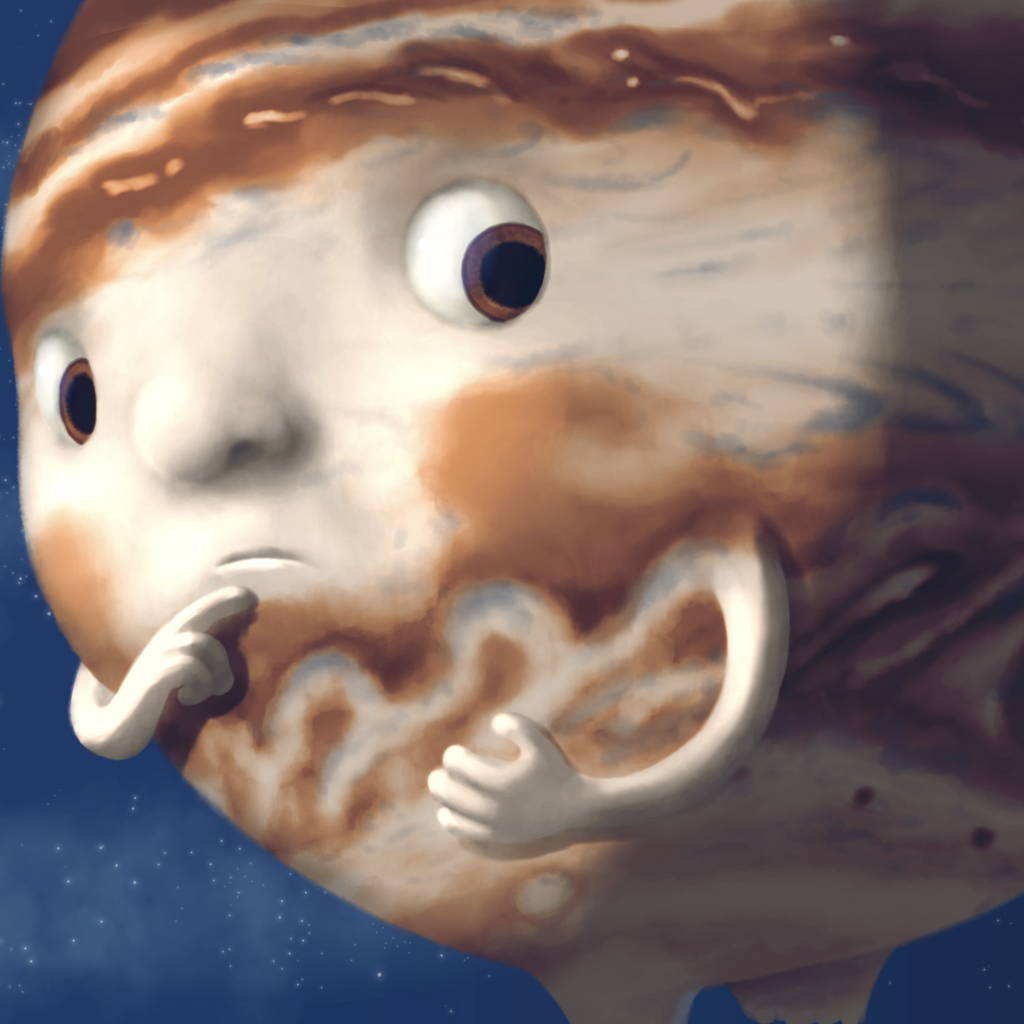 Why is it called Jupiter?
The Romans had many gods, but the most important of these was Jupiter, who was the King of all of the Gods. So, they called the largest planet they could see in the night sky after their greatest God of all, mighty Jupiter.
Jupiter, the Roman God, was also often called ‘Jove’, so Jupiter and the other outer Gas Giant planets (Saturn, Uranus and Neptune) are sometimes also called the ‘Jovian planets’.
Why is Jupiter the big daddy of all the planets?
Jupiter is simply massive, and easily the biggest object in our solar system after the Sun.  If you combined all of the other planets in the solar system, Jupiter is still twice as large as all of them together. If Jupiter were a basketball, the Earth would only be the size of a grape. That’s why he’s the big daddy of the planet family!
Why is Jupiter all stripey?
The stripes and swirls that we see on Jupiter are actually massive cloud systems made up of water (like our clouds), ammonia and methane (not like our clouds), all swirling around in Jupiter’s atmosphere of hydrogen and helium. There’s no solid surface anywhere for anyone or anything to stand on.
Why does Jupiter have a windy bottom?
A mighty storm, known as the Great Red Spot, has been raging for hundreds of years in Jupiter’s southern hemisphere. The storm, much like a massive hurricane or cyclone, was first observed in the 1600’s. Sometimes it gets bigger, and sometimes it gets smaller, but it is a huge storm that could swallow two Earth-sized planets. Winds in the Great Red Spot reach speeds of 620 km/h (384 mph), which is almost twice as fast as the strongest ever recorded hurricane or cyclone here on Earth. Now that’s a windy bottom…
Land of the Giants
Jupiter is the biggest of the four outer planets of the solar system, which are known as either the Gas giants (Jupiter and Saturn) or Ice Giants (Uranus and Neptune).
Is Jupiter really 6 years away from the Earth?
A spacecraft and robotic probe called ‘Galileo’ was launched in 1989, and after using gravitational slingshots from Earth and Venus, arrived in orbit around Jupiter six years later.
As the first spacecraft to orbit Jupiter, ‘Galileo’ even dropped a little robotic probe into the Jupiter’s clouds to see what was really going on there. The probe fell through the clouds for about one hour, sending back vital data to Earth before it was probably destroyed.
For more information - see https://spaceplace.nasa.gov/all-about-jupiter/en/ for lots more information for kids about Jupiter.
Buy Book
ShareTweetPin itE-mail