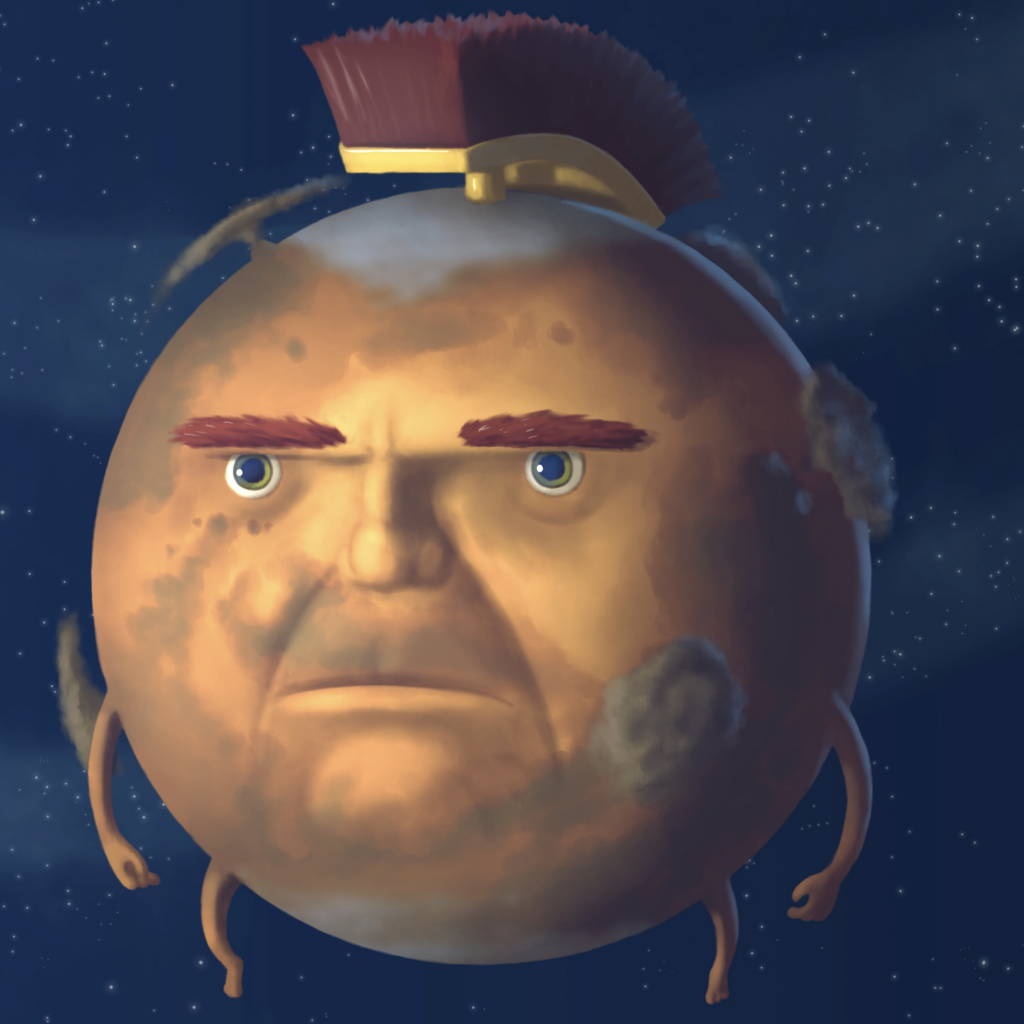 Why does Mars have a red brush on his head and look so angry?
The ancient Romans named this planet after their mighty God of War, Mars, because of the way it twinkles blood-red in the night sky. So, Mars is wearing the crest from a Roman soldier's helmet and is looking very fierce and warlike, just like the God he was named after.
Why does Mars twinkle in the night sky?
Mars doesn’t create its own light, like the Sun. Instead, when we look at Mars, we actually see sunlight reflecting off its surface. And the surface of Mars is covered in rocks and dust which are a rusty red colour, as they’re rich in iron oxide (rust is a type of iron oxide). So, the bouncing sunlight we see from Mars appears rusty and blood-reddish.
Are there really big dust storms on Mars?
On Mars, we have seen the largest dust storms ever in the solar system. Mars has a very thin atmosphere of carbon dioxide, and when the Martian wind really gets going, it kicks all of that fine, red, rusty dust very high up into the sky. This creates more winds, which then pick up more dust, and so on. And as Mars is a global desert, there’s no lack of dust to feed into these storms. Some dust storms actually blanket the entire planet and last for months.
Are there really Martians on Mars?
For a long time, people have thought that there might be life on Mars, which is why aliens are often called ‘Martians’. However, no life forms have been found so far on Mars, or in fact anywhere in our solar system or beyond. That doesn’t mean they’re not out there, of course, it might be that we just haven’t found them yet.
Are there volcanoes on Mars?
Mars is home to the biggest Volcano found so far in the Solar system, called ‘Olympus Mons’. At around 22km (14 miles) high, it is roughly 3 times higher than the highest mountain on Earth, Mount Everest (8.5km or 5.5 miles high). There are also several other large volcanos, and extensive lava flows over the surface of Mars. But luckily for any Martians that may be up there, these volcanoes all appear to be asleep at the moment.
What is Mars like?
About half the size of the Earth, Mars has many of the features we have on Earth, such as seasons, polar ice caps, valleys, volcanoes, deserts and weather.
How many moons does Mars have?
Unlike Earth, Mars has two moons which are called Phobos (meaning ‘Fear’) and Deimos (meaning ‘Panic’), which are appropriate names for the ‘sons’ of the God of War.
Why is the planetary symbol for Mars used to represent men here on Earth?
The planetary symbol for Mars has long been used to represent men here on Earth. It represents a shield and an iron-tipped spear, which is appropriately warlike. As most wars in history have been fought by men, the association between men and this symbol for the little warrior planet stuck.
Has anyone ever been to Mars?
No human has set foot on Mars……yet. But that may change in the near future.We have sent lots of spacecraft and robotic probes either directly to Mars or into orbit around the red planet. As of 2018, at least 12 robotic probes have attempted to land directly on the planet’s surface. Seven of these landed safely and then trundled off to explore the planet for us.
Does it really take 7 months to get to Mars?
As with all the planets, travel time depends on a lot of factors. The little-wheeled rover ‘Opportunity’ took around 7 months to reach Mars in 2004. Designed to operate for a little more than 90 Earth days, ‘Opportunity’ trundled around Mars for 14 years (5,111 Earth days) over 46 km (28 miles) looking for evidence of water and any signs of life. A massive, planetary dust storm in June 2018 put an end to little Oppy's happy wanderings, however, and NASA declared the mission over in February 2019.  Time for a little rest, after all that dusty roving...
More information; see https://spaceplace.nasa.gov/all-about-mars/en/ for lots more information for kids about Mars.
Buy Book
ShareTweetPin itE-mail